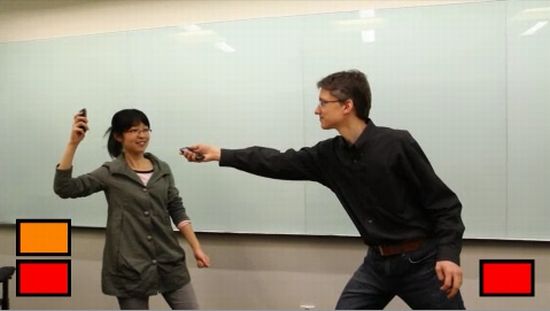 As swordfighters invite cuts and bruises to win laurels and entertain their spectators, their acts often inspire commoners to master a few tricks for sure. With its aim to satisfy those lily-livered folks who can’t afford to have the slightest scratches on their arms or bodies but still wish to learn a few sword-fighting lessons, a team at Microsoft Research has come up with a hardware localization technology that can deliver some actual training sessions using smartphones only. Dubbed as SwordFight, the game relies on existing smartphone hardware and newly developed FAR technology to ensure that gamers receive no bruises at all.

The FAR technology enables a smartphone to measure the time taken by a chirp, which emanated from another smartphone, to hit its speaker. Thus, the smartphone could actually determine the distance and the position of the other device. This further allows a player to jab his opponent’s device by just aiming his smartphone towards the other device. The game calculates feedback from phone’s accelerometer and digital compass to find out the winner with 2-centimeter accuracy. However, for allowing the SwordFight to do so, what users need to do is strike within 15 centimeters.

Gamers need to wait and watch when Microsoft releases SwordFight. As reported, the maker doesn’t have any such plans as of now.