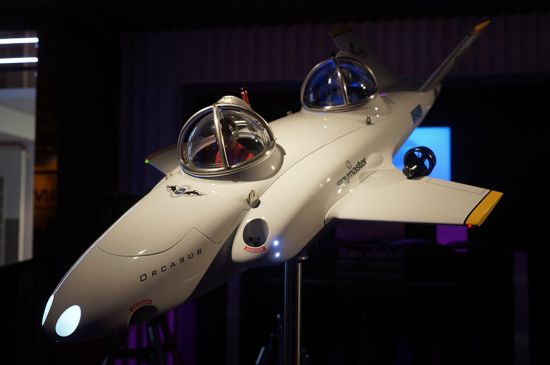 Developed by security devices manufacturer, Spymaster, here is a mock-up of a $2 million private submarine called the “Orcasub” that will take you deep under the water to explore mesmerizing submarine life. Displayed at Harrods, the 22 ft-long submarine can be controlled by joystick and pedals. Based on the principles of flight, the 4-tonne Orcasub uses thrust, lift and drag to bank, curve and turn similar to a private plane.

Made according to Lloyd’s Register standards, the custom-built submarine includes multi-beam sonar to avoid underwater collisions. Featuring a 60,000 lumen Nuytco NewtSun ultra-LED lighting system to illuminate the adjacent water for better visibility, the base model of the submarine can go down to 1,000 ft with ease. Incorporating an enhanced digital underwater communication system to stay connected to the outer world, the luxury submarine is a dream come true for divers. If you want to go deeper into the water, the $9.32-million version of the made-to-order submarine can descend up to 6,000 ft.