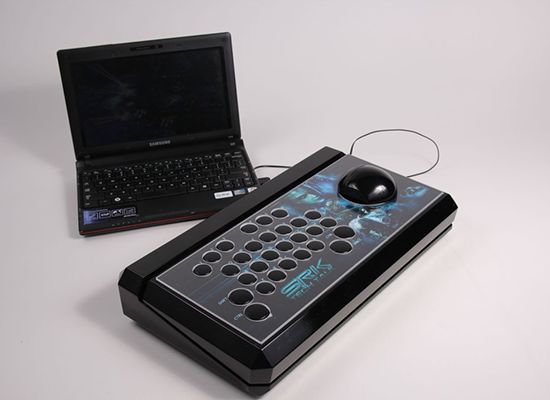 Mauricio Romano, a Master League StarCraft II player, has come up with an arcade stick that helped him win the SRK commissioned crossover contest. The modded Ultrastik joystick uses one USB input; still it helps one to have keyboard- and mouse-like control over real time strategy games. You’ll sure love the left-sided hemispherical part of it – a joystick actually – that takes its inspiration from traditional trackball mouse.

The real sizzler has 29 Sanwa buttons in LED housing, including one control button on either sides, a space and shift button. The decal features Kerrigan, Raynor and some marines as well. If you’re seriously into gaming, you will appreciate the ingenuity that has gone into the conception and creation to this DIY mod.

Design wise, it’s one of the most perfect mod that any gamer would like to use once for sure. As far as performance is concerned, you might never lay your hands on the contraption to judge it yourself. However, if you are into DIYing, you may create one for yourself by going through the manufacturing process in the video below: