What to take into account when buying a new TV 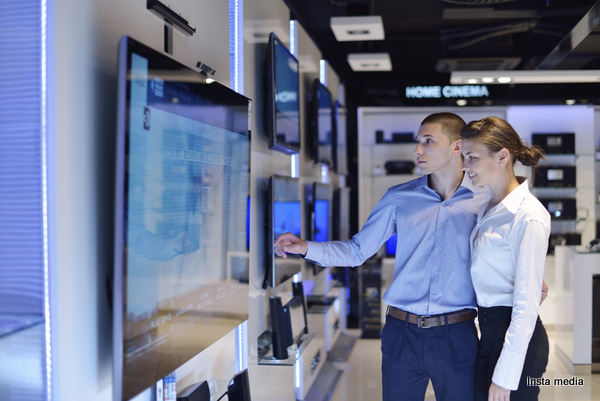 More people than ever are watching television and are doing so, on increasingly impressive and technologically complex devices. As our technological capabilities continue to develop at an incredible rate, the quality of our television broadcasts increase accordingly – as do the number of features we are able to embed in a television set.

However, the speed of such change and the choice on offer can make it difficult to select which new television you would like to purchase. So, what exactly should you be looking for in a new TV set?

One of the most important considerations when buying a television will be how much space you have to play with and what size screen you think is suitable. Screen technology has advanced to the point at which size is no longer an issue and consumers are really able to go as large as they like.

Consequently, the size of a television really depends on the constraints imposed by the room it will be placed in and how dominating a feature you wish it to be. It’s often difficult to visualize how a television will look in a certain space so try and use your old set as a comparison.

The three main screen technologies, LED, LCD and plasma, all have their benefits and disadvantages. Which TV you decide to go for, will largely be determined by personal preferences.

While a led TV is considered more high-end, you may pay a little more for it than with other technologies. Plasma televisions are restrained by poorer performance when it comes to brightness but generally have a good contrast ratio. Finally, LCD televisions are a cost-effective purchase but won’t perform as well as LED televisions. You must therefore evaluate whether it is better to save a little cash and sacrifice your viewing experience or spend a little more to get a top-end model.

Recent developments in television technology have seen the introduction of smart TVs on to the market and into many people’s homes. As modern consumers demand the consolidation of different technologies into single devices, the television has become much more than a one-way viewing experience. Many televisions now operate as home media centers, controlling media devices, connecting to the internet and being used as an efficient means of communication. When you look to purchase a new television, you’ll have to consider whether these features are important and necessary to you and whether you’re interested in the future of the TV experience.

Most people are restricted by cost and will find that, they’ll have to compromise on certain features or qualities in order to afford the purchase. Fortunately, modern televisions are becoming more affordable and high quality, meaning that even those at the lower end of the price spectrum will perform to an exceptionally high standard.

With this in mind, it’s important not to think of price as an obstacle to the purchase of a high quality, new television as most TVs will provide you with an excellent viewing experience.

What to take into account when buying a new TV was last modified: July 16th, 2013 by DrPrem Jagyasi
broadcastsbuyingdevicesScreen technologytechnologically complexTV